A
DUANE HOWARD TOPS IN T.P.TRAILERS MODIFIEDS, JESSE LANDIS ADDS HIS NAME TO SPORTSMAN FEATURE WINNERS AND DYLAN HOCH GRABS 602 SPORTSMAN CRATE VICTORY IN MOM'S NIGHT ACTION AT GRANDVIEW SPEEDWAY
BECHTELSVILLE, PA. May 9, 2021. Ma Nature smiled on Grandview Speedway Saturday night and allowed a Mom's Night NASCAR Advance Auto Parts Weekly Series tripleheader to be completed with Duane Howard battling with Jesse Leiby in the T.P. Trailers 358 NASCAR 30-lap Modified feature beginning on the 15th lap. The veteran campaigner tried to dive underneath the rookie and later attempted the outside trek, but each attempt failed. Finally on the 22nd lap, the six-time point champion got past Leiby and went on to take the win.
A new name was added to the list of T.P. Truck Equipment 25-lap Sportsman feature winners. Jesse Landis ducked underneath veteran Chris Esposito with two laps to go and claimed his first career victory at the oval.
In the 25-lap 602 Sportsman Crate feature, Dylan Hoch took over the lead on the fourth lap and won by a comfortable margin over runner-up Cody Kline for his first win in that division. He has one victory to his credit in the regular T.P. Trailers sportsman class.
More than 100 race teams took part in the night of excitement.
Modified action saw Leiby move out quickly at the drop of the green followed by Bobby Gunther Walsh, Mike Lisowski, Darrin Schuler and Craig Whitmoyer.
Lisowski overtook second on the sixth lap and set his sights on Leiby, who was distancing himself from his fellow competitors. Gunther Walsh, Kyle Weiss and Whitmoyer completed the top five by this time.
The order behind Leiby at the completion of 10 laps was comprised of Lisowski, Weiss, Howard and Gunther Walsh.
Howard was on the move and advanced to second by the 15th lap. He quickly reeled Leiby in and was trying every lane to pass him, but each attempt was thwarted. Waiting in the wings anticipating a slip up in hopes of gaining a position were Lisowski, Craig Von Dohren and Mike Gular.
The lead changed for the second time when Howard put the Butch Getz No. 15G ahead of the pack, but Leiby stayed with him trying to regain first.
On the 25th lap Brad Brightbill spun between turns one and two just as the front runners approached bringing out the caution. They narrowly avoided being involved and scrambled in several directions, but Leiby, who was having his best run, and Richie Hitzler weren’t as fortunate and were out of competition. Howard maintained first on...
Continue…

(Chemung, NY) Someone needs to load up Ray Hodge, Chemung Promoter, and Joe Skotnicki, RoC Director, and take them to a casino. On a day when racetracks all over NY were cancelling, they decided to gamble and go for it. They came out on the winning end as the event ran with just one minor snag. A brief shower paused the action for about 30 minutes, but it was otherwise a cold and sunny afternoon. Patrick Emerling took the 75-lap RoC event after a nail-biting, final few laps. Other winners on Northeast ATV night were Garrett Zacharias (Insinger Super Stocks), Greg Moldt, and Josh Parker (Marion Decker Agency Hobby Stocks). Chase Sinsabaugh, Bandit, and Kalysta DeMark, Outlaw, took wins in the INEX Bandolero division.

The Race of Champions Modified Tour rolled into Chemung for their first event in New York State in over 600 days. Following their three heats and redraw the field was set. Patrick Emerling, defending Tour champ and fresh off his Whelen Modified Tour win, drew the pole with Tony Hanbury drawing second. Emerling led the field off turn two, with Daryl Lewis, Jr., early mover Tommy Catalano, and Hanbury in pursuit. Emerling had to survive restarts following four cautions and he did so seemingly easily. Austin Beers and Matt Hirschman were also consistently moving up through the field and the trio ran together for many laps. As lap 50 was scored, Emerling was still leading Beers. By lap 59 Hirschman took over second and the race was on. By lap 68 Emerling and Hirschman approached heavy lap traffic. Hirschman got to the inside of Emerling but a lap car forced him to back off and he lost some momentum. At that point Hirschman had run out of time. Emerling sailed across the finish line ahead of Hirschman, Beers, Zane Zeiner and Catalano. “We fought all week to get the car done. It ran good all race long. I ran hard, it’s never easy, and I knew they were saving their tires for the late charge,” Emerling said.

Garrett Zacharias left Chemung a week ago after a tough night, made even tougher when the motor in his Super Stock blew. The team had him back and ready to race, and he was virtually flawless Saturday afternoon. Lined up alongside his father, RJ, for the start of the 25-lap feature, the outcome was good for the son but not for the dad. RJ got into Tim Gullo in turn three, bringing out the first of three...
Continue…

CRSA Sprints Opener Pushed To May 14 at Penn Can

A
CRSA Sprints Opener Pushed To May 14 at Penn Can

(SODUS, NY) – CRSA-sanctioned racing got completely shut out over the weekend as the CRSA Sprints season-opening event at Penn Can was cancelled due to wet weather in Northern Pennsylvania. The 2021 Series Opener has now been pushed to this Friday May 14 at Gary Folk and family’s facility.

The double shot of saturated grounds came just 12 hours later as Paul Cole had no choice but to pull the plug on Land of Legends Raceway’s season opener Saturday night. CRSA-sanctioned racing sponsored by Mike Emhof Motorsports takes place weekly at Cole’s sweeping, half-mile speed plant. A key cog in the CRSA wheel during the season.
The weekly field at Land of Legends has been a proving ground for new talent, injecting young blood into the field of wily veterans that make up the CRSA Sprints travelin series. Land of Legends Raceway is anticipating upwards of 20 cars weekly in 2021, with many of those drivers participating in the CRSA Sprints series schedule.

This coming weekend will see the CRSA Sprints kick off their 2021 Series with their opening event at Penn Can on Friday night. Weekly competition will then pick up the action on Saturday night at Land of Legends in their thrice rescheduled Season Opener. 2020 track champion Alysha Bay will welcome all takers as she will defend her crown Saturday evening.

Climbing from the shadows of a four-race 2020 schedule, the Super Gen Products with Champion Power Equipment CRSA Sprints prepare to embark on an ambitious 16-race 2021 schedule this Friday.

“The future stars of sprint cars” will compete at Penn Can Friday for their 27th race in series history. This event on Friday May 14 will be flanked by two more stops at “The Can” on July 23 and September 25 for the “King of the Can”.

The CRSA Sprints wish to welcome back Insinger Performance with their Stinger Race Fuel as a series partner in 2021. Insinger Performance has been supplying racers with the fuel they need for over 37 years. They provide Stinger Race Fuel and Racing Alcohol and are the No. 1 supplier of 99.9% Methanol in the northeastern United States. Servicing the racing industries as well as the Oil & Gas industry with the purest methanol available.

Will it help get you to a race? Will the racing be better? 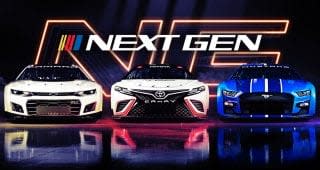 What started after the 2018 season as a clean sheet of paper in NASCAR’s Research & Development Center is now delivered, dressed and ready for its close-up. NASCAR’s three automakers released their Next Gen models for Cup Series competition in 2022 on Wednesday at The Park Expo in Charlotte...

Weedsport Speedway to Reopen for Test and Tune on Sunday, May 16